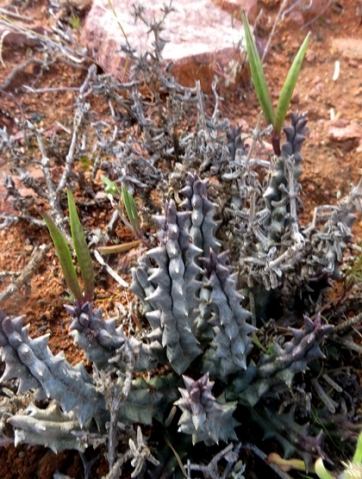 The Quaqua genus consists of clump-forming stem succulents branching at ground level, some also higher up. This stapeliad genus has no species that grows stolons.

The grey to dull purplish stems are four- to five-angled, occasionally six-angled with thick-based, conical tubercles up the stem ridges. Each tubercle is tipped with a pointed, hard tooth that may be lost on old stem parts.

One to twenty flowers grow solitary or fascicled, mostly from upper stem parts. The lobed corollas have outer and inner coronas in the centre, both also lobed. Some Quaqua species have flowers with unpleasant odours, a feature of several plants in other Apocynaceae genera as well.

A Quaqua fruit is a pair of cylindrical follicles tapering to narrow, conical tips and slightly to the base, resulting in a spindle-shape. The greenish, purple-blotched ones in picture are possibly quite young; they usually spread to a right angle between them and the colour less green, greyer or dull pink-purplish. There are stout, purple stalks on the fruits that emerge from the channel between tubercles where Quaqua flowers grow.

There are 19 species of Quaqua, all of which occur in the drier parts of South Africa, mostly in the winter rainfall region, some also in Namibia. Four of them are divided into subspecies as well. The Quaqua genus was reinstated in 1983 to accommodate the socalled hard-stemmed Caralluma species.