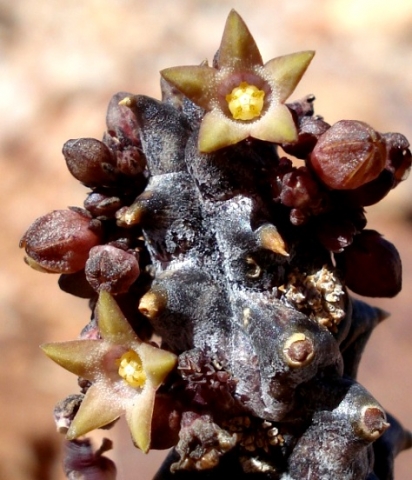 The flowers of Quaqua incarnata subsp. hottentotorum, commonly known as aroena, a name inherited from an indigenous language, are quite small, growing in fair numbers on the stems as can be seen on the specimen in picture.

Globose buds with rough, reddish and brown surfaces in various stages of swelling out to readiness for opening are in evidence, clustered near the stem tip among the tubercles. Surface cells display both shiny exteriors and a hint of translucence. Narrow, fleshy calyx lobes with acute tips can be seen at the corolla base. The flower is a fleshy, buff coloured, five-pointed star. The sunken central cup of the corolla houses its tiny yellow and white vital parts.

The subspecies distribution is in the Northern Cape and beyond the South African border. These flowers were seen in habitat during April in central Namaqualand. The plants grow on stony slopes and flats in sandy soils. The plant is not considered to be threatened in its habitat early in the twenty first century (Le Roux, et al, 2005; iSpot; http://redlist.sanbi.org).