Home » GENERA T-Z » Tylecodon » Tylecodon wallichii subsp. wallichii after blooming
Back to Category Overview
Total images in all categories: 11,632
Total number of hits on all images: 6,749,016 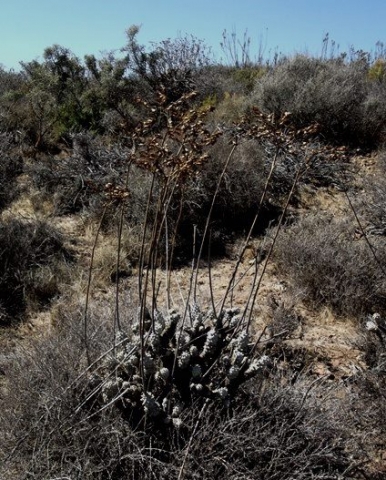 After flowering, the dry remains of Tylecodon wallichii inflorescences may persist on the plant as in the photo, tall above every stem-tip that performed. The upper stem parts where the last season’s deciduous leaves had dropped off are whitish, older parts lower down are dark.

The subspecies found in the Western Cape is T. wallichii subsp. wallichii. The other one, subsp. ecklonianus is found in the south of Namibia and in the Northern Cape as far south as Kamieskroon. The photo was taken near Montagu in March.

Both subspecies grow on lower mountain slopes in arid or semi-arid regions. Neither of them is considered to be threatened in its habitat early in the twenty first century (Frandsen, 2017; Shearing and Van Heerden, 2008; Vlok and Schutte-Vlok, 2010; iSpot; www.redlist.sanbi.org).