Home » GENERA T-Z » Tylecodon » Tylecodon wallichii subsp. wallichii in flower
Back to Category Overview
Total images in all categories: 11,451
Total number of hits on all images: 6,213,972 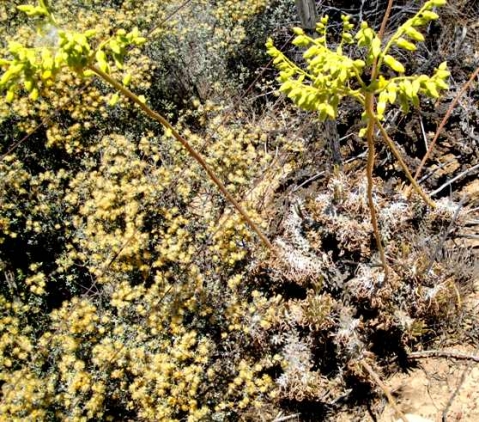 Tylecodon wallichii grows along the Richtersveld and Namaqualand coast and eastwards across the karoid scrub into the Little Karoo. This photo of subsp. wallichii was taken in the Koo Valley north of Montagu in December. Note the shrivelled up leaves on the succulent stems at the plant base. Usually only the pointed leaf-bases or phyllopodia remain on the stems.

Several cotyledons and tylecodons share the Afrikaans common names of nenta and krimpsiektebos in wide ranging South African farming communities. This is due to the similar stock illnesses (and losses) caused by these plants when animals graze on them in times of drought. Even dogs eating carcasses of animals lost this way contract the symptoms.

Still, the Khoi people found ways of using T. wallichii in spite of its poison in their ancient medicines (Shearing and Van Heerden, 2008; Vlok and Schutte-Vlok, 2010; Manning, 2009).