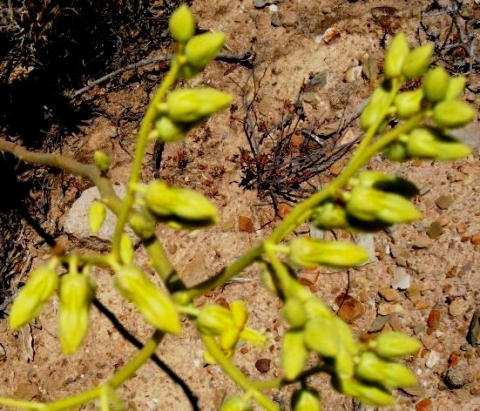 The flowers of the kandelaarbos (candelabra or chandelier bush), Afrikaans common name of Tylecodon wallichii subsp. wallichii, grow on long stalks culminating in branched panicles. The dark bare stems topped with tall greenish yellow inflorescences resemble the candelabras suggested by the colloquial name.The photo was taken in the Koo Valley near Montagu in December.

Flowers are urn-shaped, 1 cm in length and the same in diameter. The stamens of similar colour as the corolla are well exserted. Pointed calyx lobes clasp the back of the corolla tube. The summer flowers alternate with the winter leaves.

The fruit is a papery, narrowly cylindrical capsule. It has five chambers containing many small seeds (Vlok and Schutte-Vlok, 2010; Manning, 2009; Vahrmeijer, 1981).