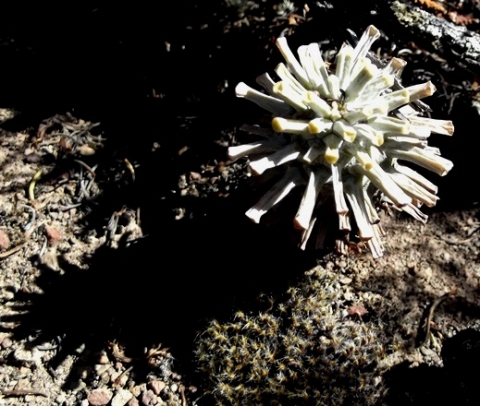 Once the deciduous leaves of Tylecodon wallichii subsp. wallichii have fallen, neatly removed in the specialised abscission zone of each leaf, a hemisphere of angular leaf stalks, called phyllopodia remains for a period. These stalks also disappear later, the tubercular bulges remaining. The photo was taken in March near Montagu.

A phyllopodium is a leaf axis or stem remaining on the plant, sometimes elongated as here. Seasonal leaf (or other body part) shedding that forms part of a plant’s life cycle is called abscission.

A cross-section of specialised cells constitutes the naturally prepared abscission zone at the base of the petioles of deciduous plants. These cells perform the leaf abscission or shedding. This happens by the cells either breaking apart causing the leaf to drop, or by absorbing so much water that the cells swell and burst, causing the to be abscised body part, often the leaf, to drop.

The loss of chlorophyll in old leaves changing colour may hasten the abscission process (Frandsen, 2017; Shearing and Van Heerden, 2008; Vlok and Schutte-Vlok, 2010; iSpot).