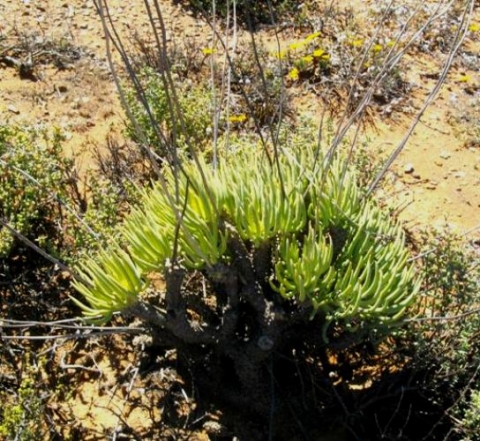 Tylecodon wallichii is a summer deciduous, succulent shrublet with a thick fleshy trunk of up to 10 cm in diameter, covered in a regular pattern of eye-shaped warty protuberances or phyllopodia. These are the knobbly bases of discarded leaves from earlier growth seasons. A mature plant will have branched several of these dark grey stems, creating a dome shape for the plant.

This plant was seen in the Ceres Karoo near the Katbakkies Pass in midwinter, making it subsp. wallichii. This is the time when the plant has leaves and no flowers. Last summer's flower stalks still persist among the leaves.

The habitat of both these plants is gravelly or sandy slopes. They grow sporadically in loamy or clayey soils among varied other vegetation. Neither subspecies is considered to be threatened in its habitat early in the twenty first century (Smith, et al, 2017; Vlok and Schutte-Vlok, 2015; Shearing and Van Heerden, 2008; iNaturalist).