Home » GENERA T-Z » Tylecodon » Tylecodon striatus
Back to Category Overview
Total images in all categories: 11,632
Total number of hits on all images: 6,749,767 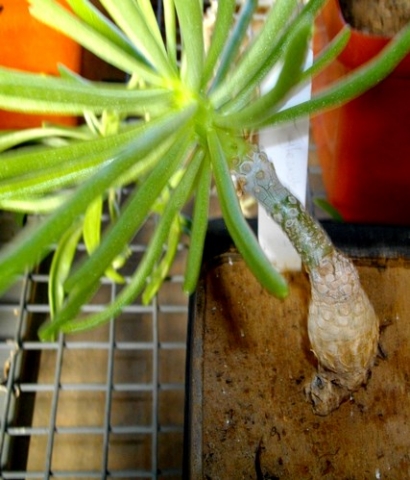 Tylecodon striatus, in Afrikaans commonly known as strepiesnenta (striped nenta), is a stem and leaf succulent growing to 25 cm in height. The young stems usually have purplish striations not seen on the plant in the photo; the possibility of an identification problem must be entertained.

The deciduous, stem-tip leaves are cylindrical but for indistinct channelling on their upper surfaces. The leaves are long, thin and pale green. The flowers are tubular and greenish yellow.

The species distribution is in the west of South Africa, along a part of the arid western coast of the Western Cape and Northern Cape, particularly Namaqualand. The plant is usually found on rocky slopes in partial shade of surrounding vegetation. Low winter rainfall is typical of the terrain. The species is not considered to be threatened in its habitat early in the twenty first century (www.redlist.sanbi.org).