Home » GENERA T-Z » Tylecodon » Tylecodon ventricosus
Back to Category Overview
Total images in all categories: 11,451
Total number of hits on all images: 6,213,837 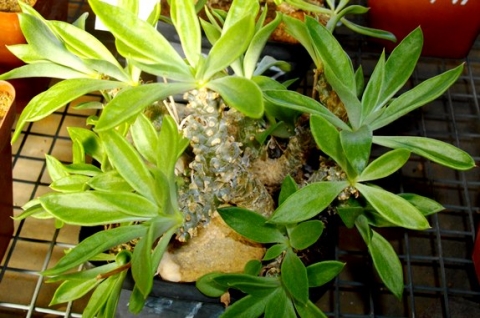 Tylecodon ventricosus, commonly known in Afrikaans as the klipnenta (stone nenta), is a stem and leaf succulent growing from a partly underground caudex or thick rootstock that develops stubby, spreading branches, up to 30 cm tall and 2 cm in diameter.

The variable stem-tip leaves are deciduous, leaving old stems bare and knobbly, pale green or brown. The leaves are linear to oblanceolate, their tips acutely pointed to somewhat rounded. More or less hairiness occurs on the leaves, some of it glandular.

The inflorescence is a thyrse, the flowers clustered in groups of up to three. The calyx has five pointed lobes, the hairy corolla tube bulging in its middle part. Flower colour is yellowish green near the base, purplish brown towards the tiny lobe tips that recurve. Flowering happens from spring to mid-autumn.

The species distribution is widespread in the more arid karoid parts of the Western Cape, but also into the Eastern Cape and Northern Cape respectively.

Much of this terrain receives its (little) rain in winter, in some parts throughout the year. The plants grow sheltered among taller shrubs receiving filtered sunlight or in rock crevices. The species is not considered to be threatened in its habitat early in the twenty first century.

This plant does, like some other members of the Crassulaceae family in the genera Cotyledon, Tylecodon and Kalanchoe, cause krimpsiekte, a neuromuscular syndrome in livestock, particularly sheep and goats (Botha, et al, Onderstepoort Journal of Veterinary Research, 65:17-23, 1998; www.redlist.sanbi.org).