Home » GENERA M-O » Othonna » Othonna perfoliata leaves
Back to Category Overview
Total images in all categories: 11,416
Total number of hits on all images: 6,192,655 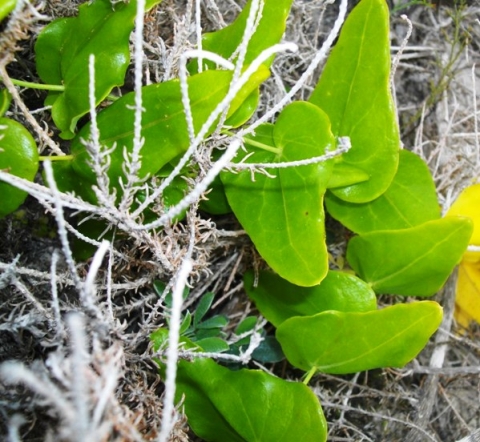 The stem-clasping Othonna perfoliata leaves are well spaced upon the thin stems, spiralling around it.

The leaves are mostly arrow-shaped, sometimes round, ostentatiously lobed or eared at the base. The leaf margins are entire, tapering to rounded or pointed tips, a tiny hair-like mucro (sharp point) visible at leaf tips in picture. Occasionally wavy near the margins, some leaf margins appear somewhat rolled under.

There is a cream-coloured midrib on the glossy, bright green leaf surface, as well as slightly angular routes followed by a few lateral veins, meandering in the general direction of the margins. The leaves are sometimes fleshy, even thinly succulent, or not.

The specific epithet, perfoliata, is derived from the Latin words per meaning thoroughly or very and folium meaning leaf, referring to the excessive lobing at the leaf base that surrounds the stem. A leaf that surrounds or clasps the stem is described as amplexicaul (Vlok and Schutte-Vlok, 2010; Manning, 2009; Manning and Goldblatt, 1996; Moriarty, 1997; iSpot; Andrew, 2017).