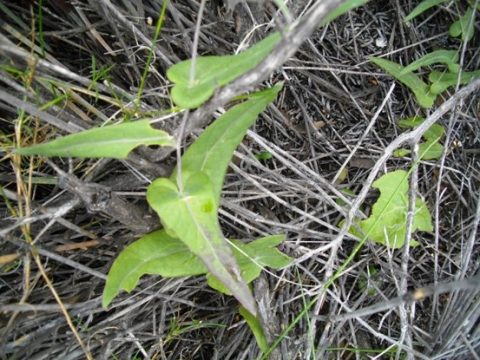 Adapted for low rainfall and harsh temperatures in the demanding inland conditions of Kagga Kamma, these Othonna perfoliata leaves are narrow, sharply pointed at the tips and dull grey-green in colour. Leaf surfaces of O. perfoliata sometimes have a greyish bloom. Leaf dimensions are about 2 cm long and up to 1 cm wide, but very variable.

Compare these leaves to the lush ones of the shiny De Hoop Reserve plant also shown in this Album to see how the pampered relatives live in the wetter coastal conditions where temperatures are moderate.

Life is never fair, irrespective of the ubiquitous endeavours of humanity for improving upon the realities of nature. A constitutional right to clean drinking water for all comes under strain when the dams run dry. We live as best we can, subject to the laws of nature.

Sharing is caring is a becoming slogan for citizens, but equality is as hard to sustain as a vacuum. Nature enforces change everywhere, continually reinstating uniqueness... another tenet and value held dear by people. Apart from managing death as its leveller, nature ruthlessly eradicates equality, warming the hearts of all kings with survival tendencies. Remembering, of course, that heads bearing crowns lie uneasy.

Interesting how human convictions shift in matters so vital to their survival, doing conceptual about-turns as values are softened by affluence, hardened by want. Nature does not care for the weak, civilisation does.

Replacing might with manners, strength with kindness, hoarding with sharing are the value attributes of the privileged, the intellectually refined and educated classes. The masses below the reach of a functional education, living with lowly job opportunities (reducing in number by the day) and remote chances of significant self-improvement within the mores of society, care little for handouts but accept them in their need, their values becoming more primitive in desperation. The liberal democracy-minded benefactors are remote and secretly despised, their magnanimity and soothing talk meaningless where root causes of poverty are left untouched. On the other side of the fence peace of mind is purchased by walls and alms, the frogs not jumping although the water hots up.

More stringent Queensberry Rules for treating the least fortunate of citizens right become law as the privileged seek solutions. Constitutional rights as promised handouts from vague or nonexistent plans add nothing. Such things merely arm the desperate in their struggle.

What does all this do among plant stories? Plant lovers prefer stories about insects, earth worms and amphibians as garnishing, not warnings about irate, toyi-toying people. Plant stories should deal in effective ways with all factors and influences that impact on the wellbeing of the plant world. There is no more relevant and pressing issue affecting the future of the plant world than the behaviour of people.

Everything real in this world is related to everything else. The point in a digression only requires patience to gather, if one's environment hasn't made that specific spark jump yet.That is why the future brings so many surprises: things juxtaposed in one era mask others lurking close by, some soon to be revealed. Boredom is not a great cause of death, not in our time anyway.

While the milk of human kindness is lauded by the gentle among the haves, dishing out what you do not own cannot work. Rolling over the debt to nature is wishful thinking. There simply is no green banker in the sky who will sign off.

The chances are continually increasing of exposing the soft underbelly of the human species to more determined competitors in nature, beckoning extinction of humans once the resources are imprudently used, euphemism for squandered. The probability of this scenario increases as the ratio of available resources to needy recipients continually weakens.

Populism, closer to nature than to culture because it is strong in feeling, weak in thinking, reminds liberal democracy of the golden mean, of avoiding excess and of dealing with the real problems. Nature has forever been doing this, but people, oh so clever, paid little heed. Until politics allows such pennies to drop donations by private benefactors fills some gaps.

The tipping point into chaos in our time is approaching from several directions of shortage, requiring sharper leadership, more widely shared understanding and determined reinvention of a sustainable lifestyle for people on earth. Otherwise nature will interfere with the excessive luxuries of the few, its interventions often arriving rather suddenly.

Such unwelcome outcomes are already upon us in the forms of climate change, resource shortages and the very natural responses of people denied by nature and their fellow human beings. What is not addressed adequately, tends to deteriorate (Vlok and Schutte-Vlok, 2010; Manning, 2009; Manning and Goldblatt, 1996; Moriarty, 1997; iSpot).