Home » GENERA M-O » Othonna » Othonna perfoliata flowerhead
Back to Category Overview
Total images in all categories: 11,656
Total number of hits on all images: 6,771,151 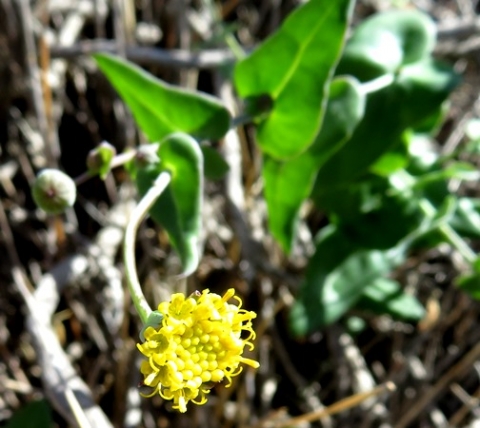 The flowerhead of Othonna perfoliata bears small disc florets only. On this plant they are yellow; they may also be white. The individual florets have tiny corolla tubes ending in five spreading, ovate lobes, fairly broad and recurving in the photo.

Because there are no ray florets, the disc florets have to be bisexual and not male only as in Othonna species bearing rays as well. The anthers have ovate appendages at their tips; the styles have branched stigmas. The male and female floral parts that require the pollinator touch are visible in the outer ring of open florets. Closer to the centre of the disc the floral buds are still closed and close together.

At another stem-tip in picture a globose pale green flowerhead bud can be seen. Its single ring of hairless bracts still covers the disc tightly (Manning, 2007; Leistner, (Ed.), 2000)