Home » GENERA M-O » Othonna » Othonna perfoliata fruiting
Back to Category Overview
Total images in all categories: 11,506
Total number of hits on all images: 6,493,857 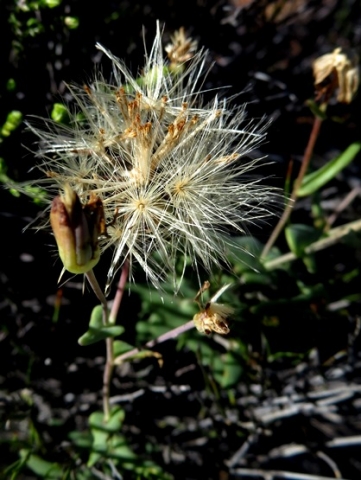 Several fruits with long, hairy bristles make up the spherical ball of sparse hairiness in the final phase of an Othonna perfoliata fruithead before the wind demolishes it. Nothing of this flamboyance was visible earlier when the involucre still held everything safely under control in its fleshy grasp.

Each fruit pappus has its own sphere of pappus bristles of equal length, pointing from the end of the fruit in directions about evenly spaced to create a spherical shape of their tips.

The photo was taken in August in the westerly hills of Namaqualand near the Spektakelberg (Manning, 2007).