Home » GENERA M-O » Othonna » Othonna quercifolia
Back to Category Overview
Total images in all categories: 11,632
Total number of hits on all images: 6,749,211 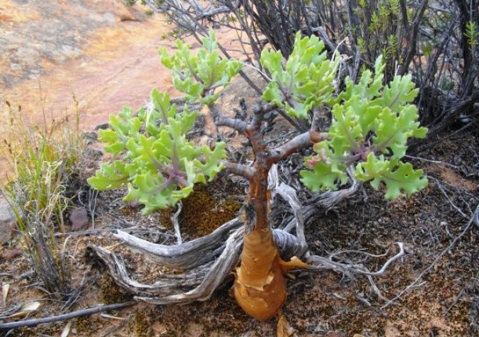 The fleshy, blue-green leaves are ovate in shape with conspicuously lobed margins. The lobes are oblong and pointed. The leaf tapers at the base into a wedge-shaped, purplish petiole (stalk). Leaves may be up to 10 cm long, 2,5 cm wide. The specific name, quercifolia, is derived from the Latin word quercus meaning oak tree and folium (also Latin) meaning leaf, referring to the leaf resemblance to those of some oak trees.

The inflorescence comprises may flowerheads growing in a corymb. The small, discoid flowerhead has about five oblong involucral lobes around its base. Flowering happens from mid-autumn through winter.

The species distribution is in the Western Cape from the Cederberg Mountains to the Swartberg Mountains and Mossel Bay. The plant grows on rocky slopes and flats in sandy or loamy soils. The species is not considered to be threatened in its habitat early in the twenty first century (Bond and Goldblatt, 1984; JSTOR; www.redlist.sanbi.org).