Home » GENERA M-O » Othonna » Othonna perfoliata
Back to Category Overview
Total images in all categories: 11,632
Total number of hits on all images: 6,749,204 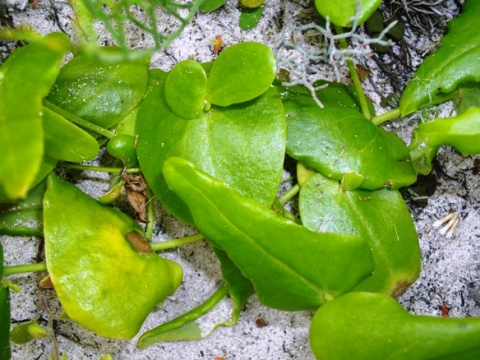 Othonna perfoliata, previously O. filicaulis and commonly in Afrikaans bobbejaankoolklimop (baboon cabbage creeper, klimop literally means climbs up) or bobbejaanklimop (baboon creeper), is a slender, straggling herb. It is a perennial with annual stems up to 70 cm long from a thick and hard, tuberous rootstock.

The stems usually twine up the branches of conveniently positioned neighbouring shrubs. This plant photographed in the De Hoop Reserve of the southern Cape coast is still establishing a suitable support structure.

The species distribution is from southern Namaqualand in the Northern Cape, across much of the Western Cape to the Little Karoo as far east as Uniondale.

The plant grows among diverse vegetation types, including particularly fynbos, usually partially in shade of other plants or rocks. It is found in terrain from sandy flats to rocky slopes and granite outcrops. The species is not considered to be threatened in its habitat early in the twenty first century (Vlok and Schutte-Vlok, 2010; Manning, 2009; Manning and Goldblatt, 1996; Moriarty, 1997; iSpot; www.redlist.sanbi.org).