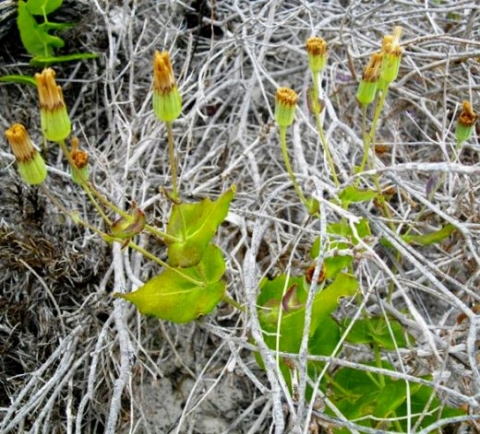 A few discoid flowerheads are grown by Othonna perfoliata from upper leaf axils on longish stalks. In the photo, the flowering is over, the erect disc florets having turned brown.

The pale green involucral cup has an angular base and a single ring of brown-tipped, oblong bracts, firmly cohering around the developing fruits.

Flowerhead colour as normally seen in the disc florets, may be yellow, dull yellow or white. Flowerhead diameter is about 5 mm. The pappus bristles are mauve. Flowering happens in winter, sometimes starting in late autumn and continuing into early spring.

There may be some plants that produce ray florets as well. They apparently bore the name of O. perfoliata while the plants bearing discoid flowerheads used to be called O. filicaulis. Now O. perfoliata is the retained name for both, if plants bearing ray florets are really around (Vlok and Schutte-Vlok, 2010; Manning, 2009; Manning and Goldblatt, 1996; Moriarty, 1997; iSpot).