Home » GENERA M-O » Nemesia » Nemesia pageae flower
Back to Category Overview
Total images in all categories: 11,018
Total number of hits on all images: 5,656,376 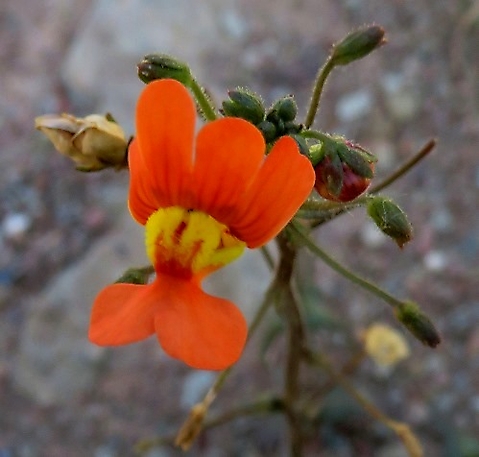 The inflorescence of Nemesia pageae is a raceme of around 15 long-stalked flowers. The calyx is five-lobed, the hairy green sepals nearly equal, elliptic to lance-shaped and acutely pointed.

The laterally symmetrical corollas are two-lipped. Flower colour is terracotta to orange, apart from the bulging base of the lower lip that is mainly bright yellow and covered in yellow hairs. The upper lip ends in four rounded lobes. The lower lip has a pair of broadly ovate lobes spreading sideways and forward. There is a 2 mm blunt spur linked to the short corolla tube. The four stamens occur in two unequal pairs.

In picture there are buds in various stages of development around the flower, as well as a beige fruit capsule. Each flat seed is surrounded by a whitish wing.

Flowering happens late in winter and early in spring. The photo was taken during October (Vlok and Schutte-Vlok, 2015; Bond and Goldblatt, 1984; iNaturalist).