Home » GENERA M-O » Nemesia » Nemesia ligulata
Back to Category Overview
Total images in all categories: 10,596
Total number of hits on all images: 5,234,641 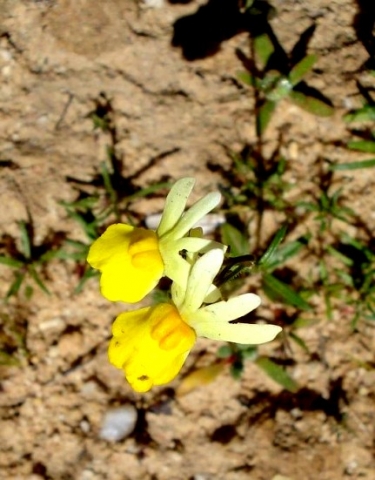 Nemesia ligulata, the club-spurred nemesia or in Afrikaans the kappieblommetjie (little bonnet flower) or langstertleeubekkie (long tail little lion maw), is an annual herb growing to 40 cm in height.

The leaves are narrowly elliptic to lanceolate and toothed. They may be shiny and are centrally channelled.

The white and yellow flower colour combination seen here may also be orange and blue or yellow overall in plants of the species. The four white spreading, erect upper petal lobes are narrow with rounded tips. The big yellow lower lip has rounded lateral lobes and two parallel oblong, velvety bulges at the base where the colour is darker. There is also a curved spur below, slender and longer than 3 mm.

The plant is at home on sandy slopes and flats in Namaqualand, the northern parts of the Western Cape and the west of the Little Karoo.  Blooming coincides with the Namaqualand annual flower fest, from late winter to mid-spring. The species is not considered to be threatened in its habitat early in the twenty first century (Manning, 2009; Le Roux, et al, 2005; http://redlist.sanbi.org).