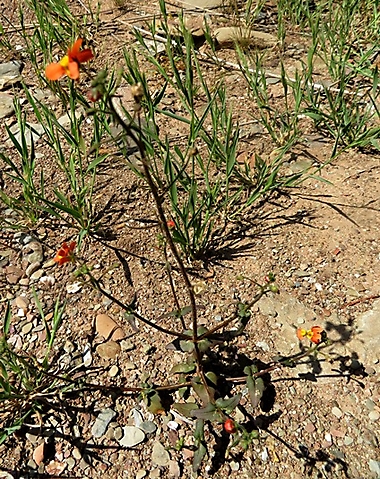 Nemesia pageae, sometimes called the velvet lionface, is a slender, erect annual, sometimes branching late from the base and reaching 15 cm to 30 cm in height. The upper stem is sticky and hairy.

The opposite leaves are ovate, oblong or elliptic. The lower leaves are stalked, the upper ones graded into narrow bracts. The leaf margins are mostly finely toothed. The blades in picture are dull maroon-green. Leaf dimensions are 2,5 cm long and 1 cm wide.

The species distribution is in the Western Cape from Worcester to Ladismith in the west of the Little Karoo.

The habitat is seasonally moist, south-facing lower slopes, mostly in renosterveld. The species is not considered to be threatened in its habitat early in the twenty first century (Vlok and Schutte-Vlok, 2015; Bond and Goldblatt, 1984; iNaturalist; http://redlist.sanbi.org).