Home » GENERA M-O » Nemesia » Nemesia ligulata Gothic-steepled
Back to Category Overview
Total images in all categories: 10,596
Total number of hits on all images: 5,234,702 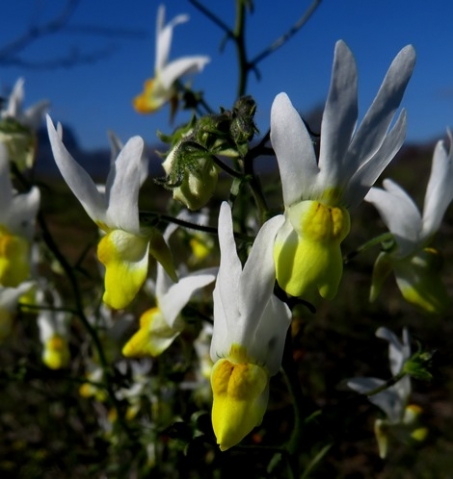 These Nemesia ligulata flowers are almost entirely yellow on the lower lip, white on the upper.

Deviations from that pattern are small on the lower lip, including white on the lateral upper parts and darker yellow colouring on the characteristic pair of bulges at the base in the centre. On the upper lip a little yellow spills over in the centre at the base and there are tiny dark lines, short and spaced along the base.

The tall white lobes of the upper lip send the mind in search of analogies. A forked mitre on an inscrutable face being one long shot. Gaudi's Barcelona Cathedral, La Sagrada Familia is another (Manning, 2009; Le Roux, et al, 2005).