Home » GENERA M-O » Nemesia » Nemesia rupicola
Back to Category Overview
Total images in all categories: 11,029
Total number of hits on all images: 5,676,653 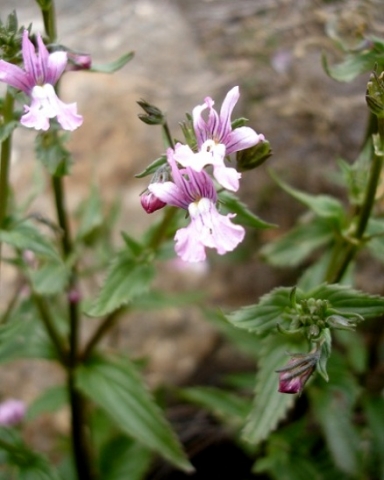 Nemesia rupicola, the mountain nemesia, is a branched perennial growing to 70 cm in height. The leaves are ovate with toothed margins and conspicuous indentations on the upper leaf surfaces along the main veins.

The flowers grow in short racemes at stem tips. Flower colour may be white, pink and pale mauve. There is a short spur at the back of the corolla. The two characteristic, elliptic, cushion-like humps can be seen in the photo at the base of the lower lip.

The species distribution is widespread in north-eastern South Africa, as well as in Lesotho and Swaziland. This plant was observed in the Mkhomazi Wilderness Area during January. It has a pale lower lip and vertical dark lines along the surface of the upper lip.

The habitat is inland grassland, often on rocky slopes, including some Drakensberg cliffs.The species is not considered to be threatened in its habitat early in the twenty first century (Manning, 2009; iSpot; http://redlist.sanbi.org).