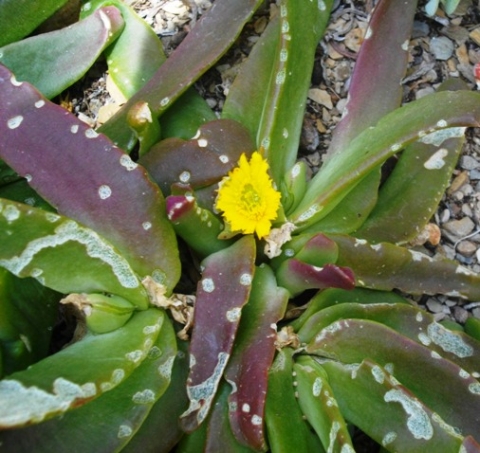 The Glottiphyllum longum common name in Afrikaans is volstruiskos (ostrich food), saying something about the plant's hardship in the Little Karoo.

The species also has an impressive list of earlier scientific names, comparable to the elaborate naming of royalty and revealing much activity in studying and describing of this plant in the past. These names were in the genera Mesembryanthemum and Glottiphyllum. Two earlier varieties of the species are no longer upheld.

The long green succulent leaves grow in two opposite arrays often lying flat on the ground. New leaves emerge in the centre at the top of the latest additions. The leaves tend to be wavy or slightly twisted rather than straight. The plant spreads by adding more rosettes, forming a clump.

The flowers are large and yellow, similar to others in the genus; mesemb-like confirming the link to their family. Many oblong petals spread in at least two whorls around a yellow cluster of stamens in the centre.

The species distribution is in the east of the Western Cape from the Agulhas coastal area near the Breede River and the Little Karoo to the Eastern Cape near Port Elizabeth.

The habitat is coastal scrub, renosterveld and karoid scrub. The species is not considered to be threatened in its habitat early in the twenty first century (Van Jaarsveld, et al, 2006; Smith, et al, 1998; Wikipedia; www.bakersfieldcactus.org; www.redlist.sanbi.org).