Home » GENERA G-H » Glottiphyllum » Glottiphyllum fergusoniae flower and fruit
Back to Category Overview
Total images in all categories: 11,506
Total number of hits on all images: 6,483,508 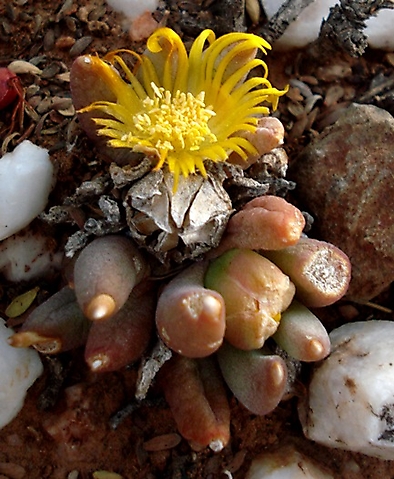 The short-stalked flowers of Glottiphyllum fergusoniae are yellow, growing solitary from the gap in the upper leaf-pair of a stem. The narrow, oblong petals angle up and out around numerous stamens comprising short, erect filaments and creamy anthers. Flower diameter is about 2 cm.

The soft fruit capsules have large closing bodies. Old capsules may persist on the plants long after the seeds have been released.

The plant resembles G. regium found more to the east, from Calitzdorp to Oudtshoorn. Flowering time tends to separate the two: G. regium flowers later, mainly from near midwinter to after midspring, while G. fergusoniae flowers in the earlier part of autumn (Frandsen, 2017; Vlok and Schutte-Vlok, 2015; Smith, et al, 1998; Bond and Goldblatt, 1984; Wikipedia).