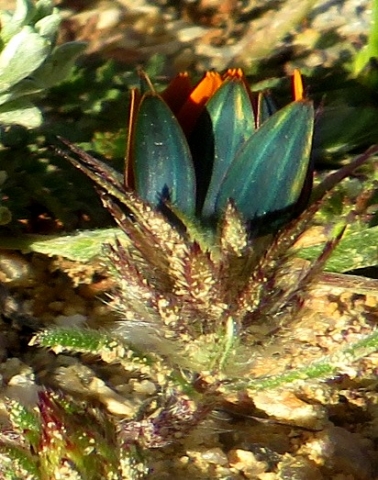 The erect ray floret blades of the Gorteria diffusa subsp. diffusa flowerhead are black with some colour modifications on the outside, orange within. Three tiny tip points crown every ray.

Three or four rows of very hairy involucral bracts ascend free of each other around the base of the flowerhead. The hairs on them vary much in length, some being purple in colour.

Purple showing in the lower left of the picture discloses the presence of another flowerhead bud tip. Green is visible on the leaves, not the bracts (Le Roux, et al, 2005; iNaturalist).