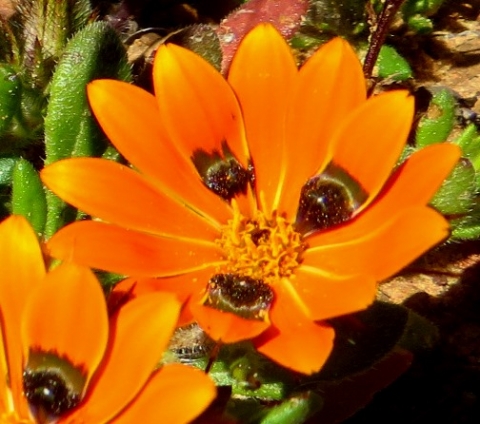 Previous
Image 8 of 29
Next

At close quarters the three beetle blotches in the Gorteria diffusa subsp. diffusa flowerhead are quite convincing. Even if you are not a beetle in need of a mate you might believe you can see some legs around the cute little bodies.

The shiny black bulge with a hint of iridescence appears to have its own fairy dust scattered sparingly upon its back. Could this be pollen? Whatever the answer, it is neatly done, not spilt over the surrounding area as such activities cause at children’s parties.

A narrow, green band with variable outline is positioned immediately outside each black marking. At its other end each pointed ray has a finely notched tip.

Petal lobes and stamens abound on the central disc of open florets.