Home » GENERA G-H » Gorteria » Gorteria diffusa subsp. diffusa, not the usual pollinator
Back to Category Overview
Total images in all categories: 10,855
Total number of hits on all images: 5,509,059 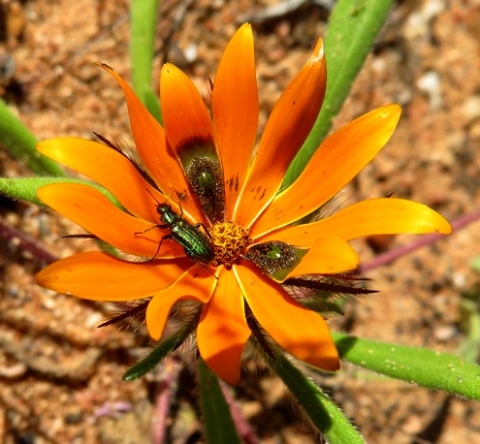 This green beetle appears at home on the Gorteria diffusa subsp. diffusa daisy. It is, however, not the normal bee-fly pollinator of this Gorteria, called Megapalpus nitidus.

Monkey beetle (Scarabaeidae: Hopliini) involvement in the pollination of these and other daisies bearing dark patches on their rays has also been researched, the results inconclusive as far as could be ascertained.

Whether this visit is a rare occurrence is unknown. Also, whether it mistook the ray blotches for mates, be it for a chat among males or the prospect of mating.

Some pollination may take place from this unusual source though, as nature extends its rules gradually or fast for increased results through every opportunity presenting itself somewhere on earth. Any sudden event may be the first of a trend, later an evolutionary change, some day accepted as the normal state of affairs.

These daisies do provide food rewards of pollen and nectar to their visitors. This means that while ray floret spots as a deception effectively increase bee-fly visits, that is not the plant’s only pollination support device (Le Roux, et al, 2005; Johnson and Midgley, 1997: Fly Pollination of Gorteria diffusa (Asteraceae), and a possible mimetic function for dark spots on the capitulum. American Journal of Botany 84(4): 429–436; www.indefenseofplants.com).