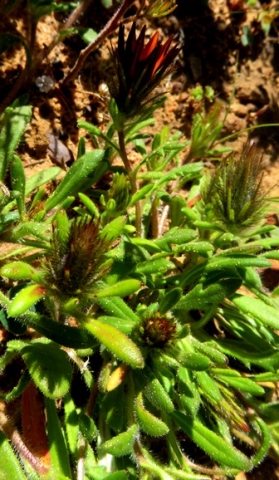 Several stages of Gorteria diffusa subsp. diffusa flowerheads, none open, are present in the photo. At least seven are visible.

Only one of them is past the flowering stage, ray florets now taller than bracts, coloured black outside and orange within. Each flowerhead grows solitary at its own stem-tip that is leafy to the top, meaning the flowerhead has no stalk.

Elongation of both stems and bracts can be observed by comparing the buds in view (Le Roux, et al, 2005; Manning and Goldblatt, 1997; iNaturalist).