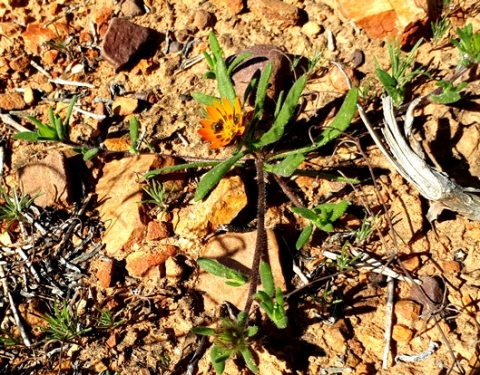 Previous
Image 7 of 29
Next

A glimpse of the lower surface of a leaf will confirm greater hairiness, a white-felted covering. This may be useful in regulating temperature in the cold or when heat reflects from the pale, sandy and gravelly soil. It may also deter or at least discourage leaf eaters. The foliage is sparse, the narrowly oblanceolate leaves usually unlobed with margins rolled under.

The subspecies grows in the Northern Cape from Namaqualand and the Bokkeveld Plateau southwards into drier inland parts in the west of the Western Cape.

The plants grow in the open in rocky places where the soils are sandy or clayey. They are not considered to be threatened in habitat early in the twenty first century (Le Roux, et al, 2005; Manning and Goldblatt, 1997; http://redlist.sanbi.org).