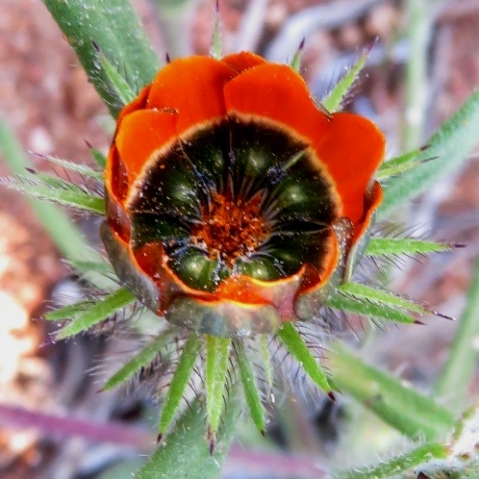 Previous
Image 3 of 18
Next

Numerous narrow, green bract tips protrude from under the cup formed by the ray florets. The bracts have sparse, herringbone-like dark hairs ascending from their margins, as well as prominent dark tips. These bracts of the involucre grow in several rows, forming a cup that becomes woody.

Two rows of ray florets form the flowerhead highlight. They spread horizontally around the flowerhead centre before turning vertical abruptly, halfway up their length. A narrow white ring at the base of the upturned parts of the rays separates the dark floor of the cup from the deep orange, inner walls.

The dark base of the cup is black to green and fluorescent in the centres of the bulging ray floret bases. Fine hairs are visible on the rounded tips of these rays. The ray florets serve only as pollen advertisements to amenable bee-flies since they are sterile.

The small orange or yellow disc in the centre comprises five-lobed florets that are fertile, at least the outer ones. The flowerhead is about 2,5 cm in diameter.