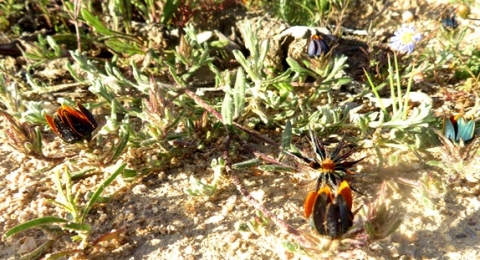 Gorteria diffusa subsp. diffusa flowerheads still in flowering mode in picture have their pointed florets erect in a circle, some inner surface orange colouring visible. The purply black and shining outer surfaces dominate at this time, the sun this morning not yet having convinced the ray florets to open and spread.

There is another shape of flowerhead present, its rays spread widely. This older one has moved on to straight dry rays folded in from the sides, their final phase of turning into a fruiting body.

The sparse allocation of leaves on the plant is erect like the young flowers, the stems in contrast have no prospect of lifting themselves off the ground. The leaves are pale and hairy in this light, their sunken midribs notable (Le Roux, et al, 2005; iNaturalist).