Home » GENERA G-H » Gorteria » Gorteria personata
Back to Category Overview
Total images in all categories: 10,855
Total number of hits on all images: 5,508,965 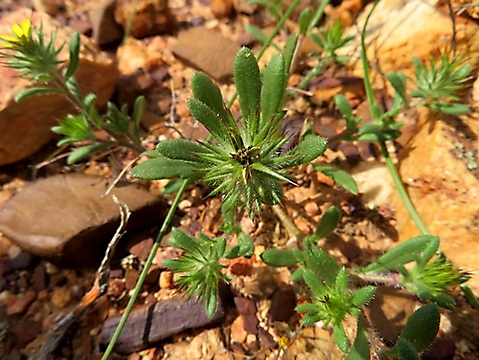 Gorteria personata, commonly the mini beetledaisy and in Afrikaans klitskruid (burr herb) or bosduifdoring (rock pigeon thorn), is a hairy, low-growing and spreading annual. It branches at the base, reaching heights from 5 cm to 20 cm.

The daisy flowerheads leave no doubt as to the plant's Asteraceae family connection. The beetledaisy name is a misnomer though, as Gorteria pollination involves bee flies, attracted by the floral markings for which the genus is named, not beetles.

The species is widespread in the west of the Western Cape including the Cape Peninsula, slightly into the Northern Cape around Nieuwoudtville and said to reach the Eastern Cape, but probably only as far as the Little Karoo in the east of the Western Cape. The photo was taken in the Biedouw Valley.

The habitat is rocky and sandy flats and lower slopes in renosterveld, dry fynbos and succulent Karoo. It is not considered to be threatened in habitat early in the twenty first century.

This plant is an invader in Western Australia where it has become a bothersome weed and a perennial (Vlok and Schutte-Vlok, 2015; Manning, 2009; Manning and Goldblatt, 1997; Bond and Goldblatt, 1984; iNaturalist; https://florabase.dpaw.wa.gov.au; http://redlist.sanbi.org).