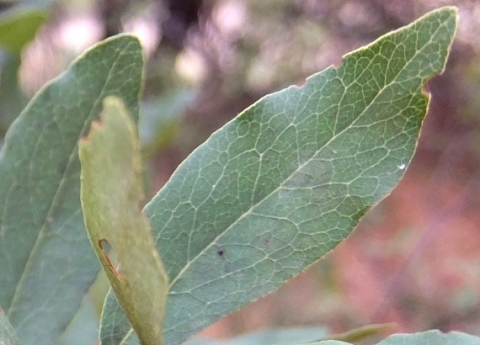 Previous
Image 5 of 30
Next

The leaf of Euclea crispa subsp. crispa is hard, leathery and mostly hairless. Leaf shape is very variable, the often seen forms including elliptic, narrowly or widely oval and forms where the widest part is nearer the tip than the base (oblanceolate to obovate). The leaf apex tapers or is rounded, sometimes notched, while the base tapers.

A notable characteristic, at least in some parts of the tree’s distribution, is the conspicuous net-veining that is translucent against the light. The midrib is the dominant part of this, ridged on the lower surface, while lateral veins don’t have strong definition among the secondary venation here.

Leaf colour varies, blue-green being common, but dark green to dull green is often seen, while young leaves have a few additional shades, including pale green and reddish, as well as a short-lived covering of hairs. Lower leaf surfaces are paler irrespective of the colour.

Leaf margins are entire and straight or variably wavy, rarely scalloped and sometimes rolled under. Crispa means undulating, the feature often being present on leaves and their margins in this species, but certainly not universally so (Coates Palgrave, 2002; Pooley, 1993; Schmidt, et al, 2002).