Home » GENERA D-F » Euclea » Euclea divinorum starting out in life
Back to Category Overview
Total images in all categories: 11,104
Total number of hits on all images: 5,772,727

Euclea divinorum starting out in life 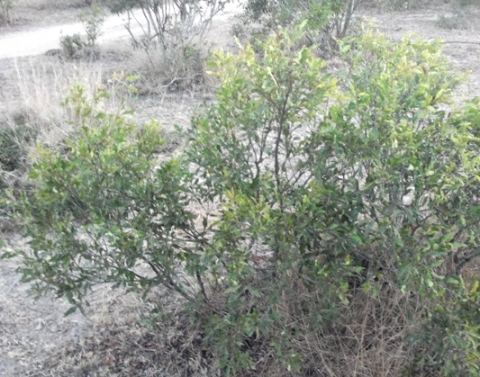 Previous
Image 9 of 27
Next

Euclea divinorum may become invasive on degraded land, as here in brackish soil beside a large drinking hole in the Sabie Game Reserve. The plant readily spreads through suckering, turning one shrub into a multi-stemmed accumulation.

The flowers of the magic guarri are tiny, white or creamy yellow, with four rounded petals. The flowers grow in short, slightly drooping, branched heads from the leaf axils; male and female ones grow on separate plants. The flower stalks are covered in small brown scales and at least start off with two bracts at the base.

The single-seeded fruits are globose and thinly fleshy, ripening into a red and later purplish black colour by late spring to autumn. Not very tasty to people, the fruits are sought after by birds (Coates Palgrave, 2002; Van Wyk and Van Wyk, 1997; www.plantzafrica.com).