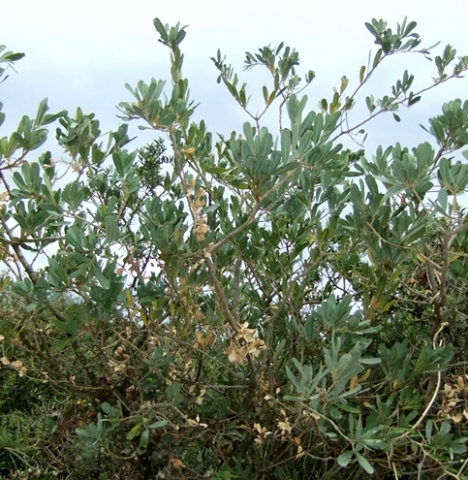 Previous
Image 1 of 30
Next

This Euclea crispa shrub was seen in the Addo Elephant National Park.

Its leaves are variable and mostly notched at their tips. Notched tips are reported next to the more common tapering or rounded ones for this species, but not that often seen.

Of the two known subspecies, subsp. crispa occurs widespread, subsp. ovata is found in the centre of the country, in the far north of the Eastern Cape and further north and west into Botswana; maybe Addo is too far south to fit.

Furthermore E. crispa resembles E. coriacea, their two distributions overlapping in the north of the Eastern Cape, but its leaves are not noted for being notched. Other species found roughly in the Addo region are E. daphnoides, E. natalensis and E. schimperi, none described as having notched leaves and E. undulata, that has undulating leaves.

So, probably E. crispa it is, but which subspecies is still unsure (Coates Palgrave, 2002).