Home » GENERA D-F » Euclea » Euclea crispa subsp. crispa opposite leaves
Back to Category Overview
Total images in all categories: 11,104
Total number of hits on all images: 5,771,666 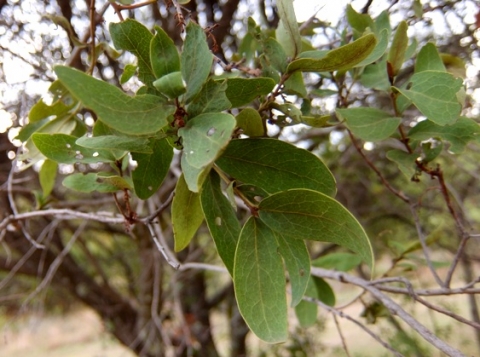 Previous
Image 5 of 27
Next

These opposite leaves of Euclea crispa subsp. crispa are from the Magaliesberg. The leaves have slender, short petioles, up to 2 mm long.

Different things are said in the literature about the arrangement of leaves upon the stems of this tree. Some say alternate or sub-opposite, others opposite to sub-opposite, while spirally arranged also appears.

All these forms are almost certainly sometimes observed, although not all in the same neighbourhood, or seen by all, leading to differences of opinion. No observer or even scientist can ever see all the trees of a diverging species (or nearly any species for that matter, apart from the almost extinct ones), no matter the size of the research grant or the perseverance.

Inferential statistics allow for those undiscovered, needle in the haystack possibilities of cases not included in a sample. This is done in the form of accepted, calculated errors, acknowledging the frailty in every investigative endeavour. Living with the compromise of reasonable error levels, i.e. being human and not all-knowing, allows for progress and learning, the options remaining open for later improvement.

Accepting individual differences in people, even among one’s own children, all (officially) of the same species, helps to understand what happens in nature. Accepting plant species adaptation to different conditions, continually evolving new features, most of them so much older than mankind, brings appreciation of differences among forms, varieties, subspecies, species, genera and families.

There may in the deep future, after our time, be splits in the human species, especially if some colonists succeed in hiving off onto other planets or remote isolation. (Some may contend that this has already happened in our time.)

But go check, there have been several different specific epithets used to describe different subsets of the broader homo or human genus in the past. Those Homo sapiens differences are largely from divergence, not convergence, although there are theories that different subspecies of humanity had interbred later again, after earlier splits or independent beginnings.