Home » GENERA D-F » Elegia » Elegia capensis
Back to Category Overview
Total images in all categories: 9,840
Total number of hits on all images: 4,473,034 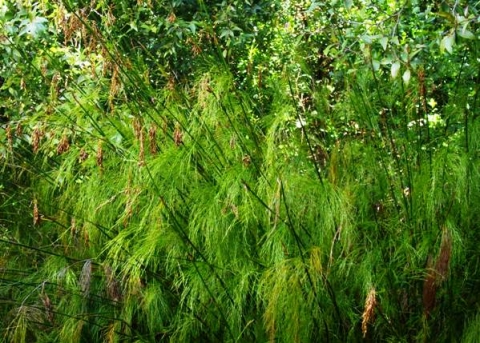 Elegia capensis is one of the popular members of the Restionaceae or restio family. This one is commonly called fonteinriet in Afrikaans. It is found close to water on sandstone slopes and where there is durable seepage in mainly coastal veld in the Western and Eastern Cape. Its abundance of delicate greenery often finds its place near the water feature in gardens as well.

The plant forms a bushy clump of sturdy, erect stems or culms from the rhizomes that tend to spread strongly in wet ground. Along each stem there are spaced whorls of fine needle-like or feathery green branches at each node up the stem. Just below each whorl of the thin branches a leaf-like structure or sheath envelops the stem. This sheath dries out over time and persists conspicuously, until flowering time late in spring.

The separate male and female flowers atop the stems also start off with leafy spathes that drop off when the flowers are mature. Seed is distributed by wind, which is a notable feature of the plant’s habitat (www.plantzafrica.com).