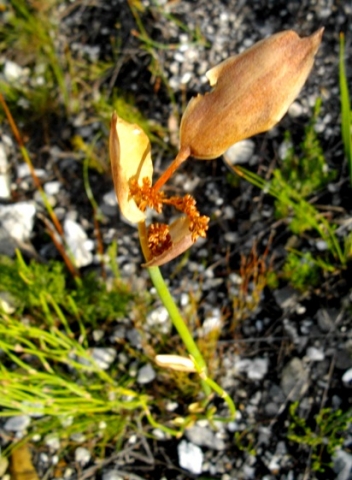 Elegia persistens grows in a loose tussock to heights of 50 cm, its culms thicker than 1,25 mm. Flowering stems are unbranched, although weaker, secondary stems, sterile and thinner, are sometimes grown that do branch.

The sheathes up the rigid main culms drop off early. Large brown, papery spathes subtend clusters of small male flowers as in the photo.

The species is distributed from Houwhoek and Worcester to Bredasdorp, endemic to the far southwest of the Western Cape. The habitat is well-drained, gravelly lower slopes. The species is not considered to be threatened in its habitat early in the twenty first century (Dorrat-Haaksma and Linder, 2012; Bean and Johns, 2005; Bond and Goldblatt, 1984; www.redlist.sanbi.org).