Home » GENERA D-F » Elegia » Elegia capensis not thirsty
Back to Category Overview
Total images in all categories: 9,913
Total number of hits on all images: 4,614,420 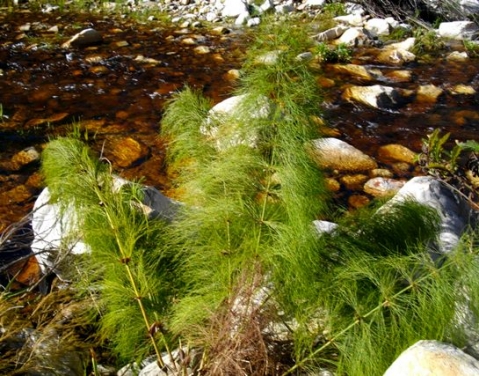 Elegia capensis does not mind living “with one foot in the water”. It also thrives in bogs and seeps. This plant hangs some stems over the shallow water beside a Western Cape river in winter.

In summer it may well be dry, above the riverbank. In contrast to the current shortage situation, the Cape still had much winter rain a few seasons ago, causing strong flow of its rivers… and will hopefully enjoy that again soon.

Restios have been here for a very long time, often part of riverine fringes. Some Restionaceae species, the family to which Elegia belongs, have been around as long ago as 65 million years. The sea levels were higher then and also the Cape mountains.

At other times, for instance around 4 million years ago, the Cape sea levels were about 200 m lower. The fortunes of all living species are closely associated with the vagaries of climate and events affecting earth itself.

Human memory of long stable periods is not wrong, just does not reach far enough back. And bad memories may even be suppressed (Bean and Johns, 2005).