Home » GENERA D-F » Elegia » Elegia cuspidata
Back to Category Overview
Total images in all categories: 8,883
Total number of hits on all images: 3,862,681 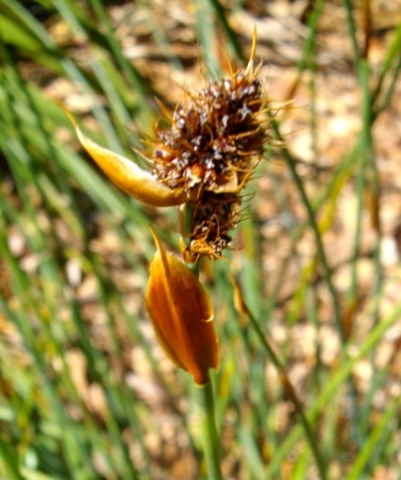 Previous
Image 5 of 12
Next

Elegia cuspidata, in Afrikaans fonteinriet (spring reed or fountain restio), grows sturdy culms varying in height between 50 cm and 1,1 m. Cuspidate is a biological term meaning to end in a point.

This robust plant is one of the 25 Elegia species growing in the Cape Peninsula. Overall there are 51 species of Elegia, tufted or rhizomatous perennials with simple or branched stems. All of them occur in the winter rainfall region of South Africa.

E. cuspidata is dominant in wetlands of Cape Point, its distribution limited to the southern parts of the Cape Peninsula, the mountains between Gordons Bay and Kleinmond and in sandveld around Mamre. Its habitat is mostly marshland or along streams at elevations below 300 m.

Large, shallow boat-shaped spathes or modified bracts among the spikelets are prominent in the photo, beige in colour with long spiny tips, similar to the awns of the bracts (Dorrat-Haaksma and Linder, 2012; Manning, 2007; www.plantzafrica.com).