Home » GENERA D » Disperis » Disperis micrantha flower
Back to Category Overview
Total images in all categories: 11,131
Total number of hits on all images: 5,810,405 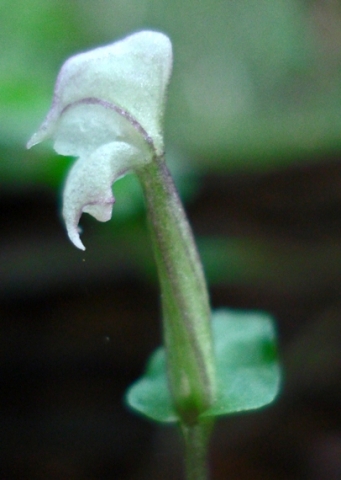 Disperis micrantha flowers grow in a lax, terminal spike that is few-flowered (two to seven). Each flower is subtended by a leafy, acutely pointed bract. Flower colour is white, pink or greenish white.

The long and thin ovary in picture is pale green and angular with purple lines along its length, twisted from resupination. The dorsal sepal is roundly to conically helmet-shaped, the two lateral petals oblong to ovate, adhering to its sides in forming the hood over the flower column. The lip ascends over the column, fused to it at the base. The deflexed lip appendage is multi-pointed, covered in hair-like papillae.

The smallness of the flowers gave the species its name: micrantha means small flowered in Greek. Flowering happens in autumn (Germishuizen and Fabian, 1982; Lowrey and Wright, 1987; www.capeorchids.co.za).