Home » GENERA D-F » Disperis » Disperis renibractea
Back to Category Overview
Total images in all categories: 10,855
Total number of hits on all images: 5,508,060 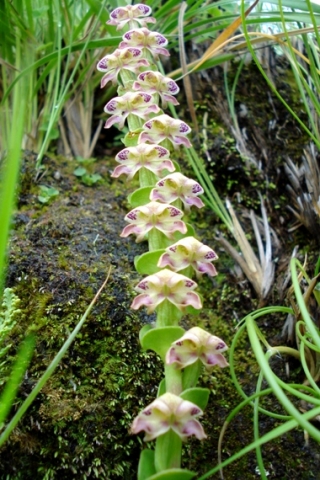 Disperis renibractea, commonly known as the kidney-bract granny bonnet, is a terrestrial orchid growing annual flower stems to heights between 15 cm and 30 cm from a perennial, tuberous rootstock.

A solitary stalked leaf, oblong and rounded grows at the base, between 1 cm and 3 cm long. The inflorescence in picture has done better than the typical ten flowers normally borne.

The species distribution ranges from the Eastern Cape to Mpumalanga in the east of South Africa. The habitat is moist montane grassland at altitudes between 1400 m and 2700 m. In picture the plant lives in a mossy damp spot, given some space by the grass to perform. The species is not considered threatened in its habitat early in the twenty first century (Pooley, 1998; www.redlist.sanbi.org).