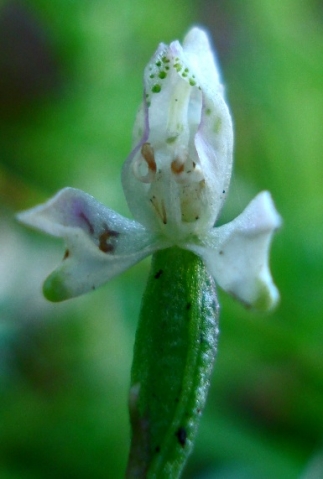 The peak of the bonnet of this white Disperis macowanii flower can just be seen at the back of the hood. At the front around the opening, green spots are scattered on the inside of the segments. Faint tinges of mauve are present on the margins of the lateral petals and visible on one of the spreading lateral sepals.

The spurs on the lateral sepals protrude forward nearly as far as the pointed sepal tips. The narrowly ovoid ovary, shiny but coarsely surfaced and ridged in picture, becomes about 6 mm long.

This species flowers with the rain: from late autumn through winter in the winter rainfall part of its distribution in the south west of South Africa and during summer and early autumn in the large summer rainfall part in the east of the country from the Eastern Cape to tropical Africa in the north.

The species does not require fire for triggering its blooming (Liltved and Johnson, 2012; www.orchidspecies.com).