Home » GENERA D-F » Disperis » Disperis macowanii flower
Back to Category Overview
Total images in all categories: 9,580
Total number of hits on all images: 4,308,843 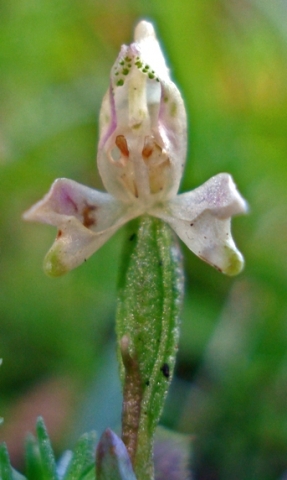 Only one or two flowers are produced in a Disperis macowanii inflorescence. Hairy, oval bracts, sometimes similar to the two stem leaves, usually spread away from the base of the ovaries. In the photo the bract is narrow, lying on the ovary, its tip lifted like a snake’s head. (The broader upper leaf peeks out below it.)

Flower colour in this species is white or mauve in various shades. The petals are green-spotted in the photo, the spots sometimes magenta.

The dorsal sepal has a pointed spur, not clearly shown in picture due to the angle of the photo. The lateral sepals have conical spurs that become about 1,5 mm long, green tipped on the specimen in the photo.

The lip of D. macowanii has a claw at its base, an elliptic mid-section and a small tip of 1 mm long. The lip appendage is linear and folded longitudinally. The lip and its appendage are flexed up into the hood, free from the column.

The species belongs to the subgenus Disperis characterised by undivided lip appendages where floral oils are secreted in many members of the subgenus from either the lip or its appendage. These oils are for the benefit (and motivation) of pollinator insects, the oil not evaporating readily at normal temperatures and pressures.

But D. macowanii is known to self-pollinate, not requiring insects (which would have to be small ones, given the flower size). This has been determined at least in the winter rainfall part of the plant’s distribution. Whether self-pollination is the predominant or only functional pollination system of the species across the whole of its large distribution area is not known (Liltved and Johnson, 2012; www.orchidspecies.com).