Home » GENERA D » Disperis » Disperis micrantha
Back to Category Overview
Total images in all categories: 11,131
Total number of hits on all images: 5,810,247 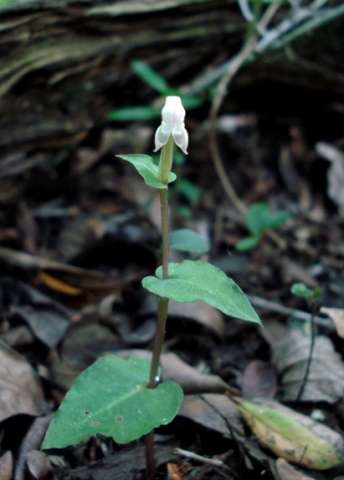 Disperis micrantha is a miniature terrestrial orchid reaching heights of about 15 cm. It grows an erect stem with two basal sheaths from an ovoid tuber.

The two or three heart-shaped stem leaves are spaced, sheathing the stem and angled with respect to each other in the photo, not alternate. Leaf margins may be entire and nearly smooth as in the photo or strongly undulating.

The species distribution ranges from the Eastern Province along the eastern reaches of the country to Limpopo. It is also found in Gauteng, Swaziland and Zimbabwe and recently, after 2012, discovered to grow near Wilderness in the southern Cape as well.

The plants typically grow in forest shade. The species is not considered threatened in its habitat early in the twenty first century.

D. micrantha is closely related to D. disiformis that has a similar lip appendage, mop-headed in shape from many papillae. They both belong to the Disperis subgenus characterised by undivided lip appendages (Germishuizen and Fabian, 1982; Lowrey and Wright, 1987; www.capeorchids.co.za; www.redlist.sanbi.org).