Home » GENERA D » Disperis » Disperis macowanii
Back to Category Overview
Total images in all categories: 11,246
Total number of hits on all images: 5,961,628 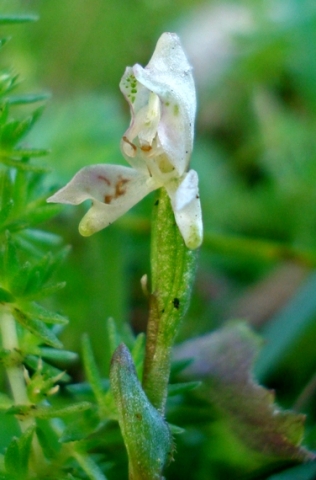 Disperis macowanii is a very small terrestrial orchid distributed widely. The slender plants reach heights of only 6 cm to 12 cm with two clasping, oval leaves spaced up their hairy stems; the upper leaf smaller than the lower one. Leaf surfaces are dark green above, usually purple below and their margins are hairy and entire. On the plant in picture only the upper leaf is visible, positioned erectly, with very little purple on its lower surface.

The species distribution ranges from the Cape Peninsula through the southern and eastern parts of South Africa into tropical Africa as far as Malawi and Tanzania. Although minuscule, the plant has adapted to much habitat variation, being only one of two Disperis species straddling winter and summer rainfall regions. Its varied habitat includes wooded rocky slopes and cliffs among moss and lichen, or moist, cool and partly shady spots in dark loamy or white sandy soils; it also grows under rotting branches in leaf detritus.

These places chosen by D. macowanii to grow in nature range in altitude from sea level to 2500 m and prove hard to find. The first record of this plant dated 1885, made of Eastern Cape specimens by Harry Bolus (when he had been already living in Kenilworth in the Cape for more than ten years), was written more than a century before the plant’s discovery in the Western Cape near Riversdale and later even in the Cape Peninsula.

The species is not considered threatened in its habitat early in the twenty first century, being so small and well hidden from sight (Liltved and Johnson, 2012; www.orchidspecies.com; www.redlist.sanbi.org).