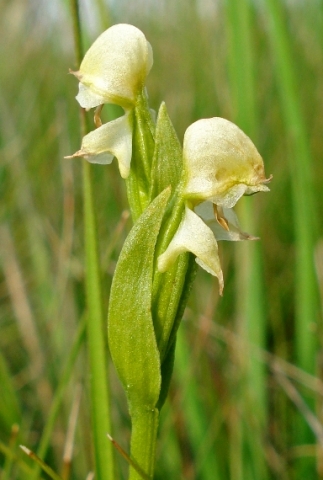 The green floral bracts of Disperis concinna flowers are about as long as the ovaries next to them. They are narrowly lance-shaped, also sickle-shaped, tapering to acutely pointed tips. The dimensions of these leaf-like bracts are about 13 mm long by 6 mm wide.

The modest downward tilt of the flower hoods obscures the flower centres from view. This forces the pollinators to come close and land before the presence of any floral oil that may be on offer is disclosed.

The grassland Disperis species (those belonging to the Disperis subgenus, such as D. concinna) may offer floral oils to the Rediviva bees that service them.

Disperis species belonging to the other, tropical forest subgenus, called Dryorkis, offer nothing. They use mimicry instead, impersonating another flower species of the neighbourhood, known to insects or other pollinators for its generosity of delivering edible pollen or potable nectar (or oil) to guests. These innocent and diligent flowers feed the pollinators doing unrewarded work for fellow citizens of flower world, neighbours that give flower world a bad name in insect world.

This is not a cerebral deception that could qualify as malicious or fraudulent intent, merely the slow process of natural selection. Those hereditary forms resembling another species capitalise upon the likeness.

Dryorkis subgenus flowers may also flaunt some yellow colouring to suggest (deceptively) the presence of pollen on the menu for would-be pollinators. Again the ingenuous, unpaid pollen carrier will stop, be taken advantage of and depart unfed and perplexed, not knowing that it may have added value in the world.

The better the mimicry (or the dumber the suckers lured), the more insects will carry pollen around for plants they might like to avoid altogether. In the case of the stingy flower species, the duration of such false expectation systems may last through many successive generations of plants, running into thousands of years, maybe millions (Pooley, 1998; www.zimbabweflora.co.zw).