Home » GENERA D » Disperis » Disperis concinna
Back to Category Overview
Total images in all categories: 11,246
Total number of hits on all images: 5,961,711 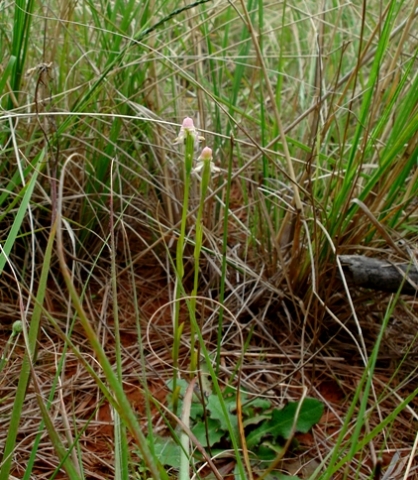 Previous
Image 8 of 43
Next

Disperis concinna is a slender terrestrial orchid that reaches heights between 10 cm and 50 cm. The alternate leaves are few, usually up to three, sometimes four. Lanceolate in shape and hairless, the leaves clasp the stem, becoming from 1 cm to 2 cm long.

The species distribution is widespread, from the Eastern Cape through KwaZulu-Natal to Mpumalanga and Gauteng, as well as Zimbabwe. The habitat is marshy grassland at elevations from 1500 m to 2400 m. The species is not considered threatened in its habitat early in the twenty first century.

The lobed leaves of the rosette on the ground belongs to a different flowering plant, probably a dandelion, not the orchid (Pooley, 1998; www.zimbabweflora.co.zw; www.redlist.sanbi.org).