Home » GENERA D » Disperis » Disperis cardiophora flowers
Back to Category Overview
Total images in all categories: 11,769
Total number of hits on all images: 6,918,670 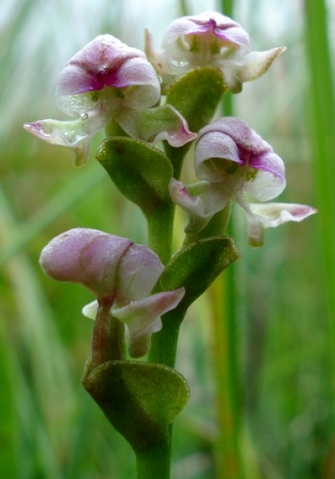 Previous
Image 7 of 43
Next

The Disperis cardiophora inflorescence in picture allows observation of the stubby, green-tipped pouches sunk into the lateral sepal surfaces: short, thick cylindrical protrusions below the shallow, boat-shaped laterals that spread like arms below the prominent hoods of the flowers. These sepals become about 7 mm long.

The hood is formed from the three upper tepals, the two purple-tipped lateral petals adhering to the sides of the dorsal sepal. Their three tips converge, forming the flattened front of the dome that partly obscures the column and lip; the lip and its appendage being flexed back into the hood over the column.

The green bract below the ovary reaches only two thirds up the ovary’s length. The bract is broadly heart-shaped with rounded tip, thickly textured, partly translucent and folding in along its centre. Cardiophora means bearing hearts (Latin), referring to the shape of these floral bracts. In picture the ovaries curve upwards where the bracts end.

D. cardiophora flowers all face in one direction on the spike. The flowers exude a strong, sweet scent, sometimes associated with chocolate. Flowering happens from late spring to early autumn (Pooley, 1998; www.orchidspecies.com).