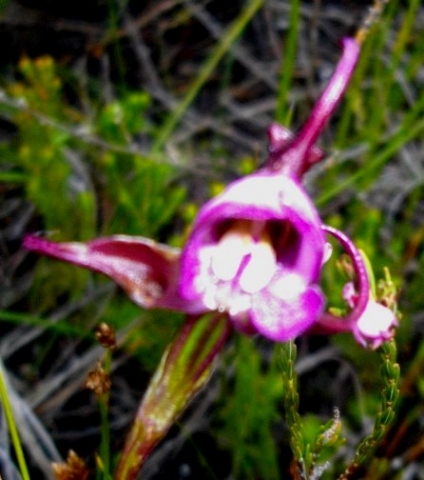 Previous
Image 3 of 43
Next

Disperis capensis, in Afrikaans the moederkappie (mother bonnet), is a slender, erect perennial growing to about 50 cm. Its two narrow, lance-shaped leaves become about 9 cm long, growing on the hairy flower stem. The moederkappie name is shared with several other orchids, not all in the Disperis genus.

This species is distributed in the Western Cape from the Cape Peninsula to the Cederberg and eastwards coastally into the Eastern Cape as far as Grahamstown, including the Langkloof.

The habitat is sandstone seeps among fynbos from sea level to elevations over 1700 m. The species is not considered to be threatened in its habitat early in the twenty first century.

There are two recognised varieties, viz. var. capensis and var. brevicaudata. The latter variety occurs only in parts of the given distribution and at elevations above 350 m. It has, as the name indicates, shorter sepal tails and an unspurred median sepal (Liltved and Johnson, 2012; Manning, 2007; Bean and Johns, 2005; iNaturalist; http://redlist.sanbi.org).