Home » GENERA D » Disperis » Disperis capensis, one of the moederkappies
Back to Category Overview
Total images in all categories: 11,131
Total number of hits on all images: 5,810,349 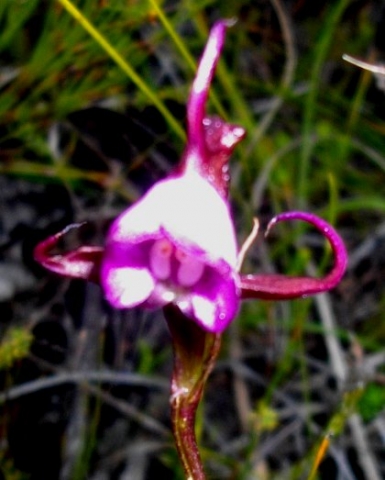 Previous
Image 4 of 43
Next

The solitary flower grown by Disperis capensis is resupinate, i.e. twisted around so that the median petal or lip moves from its original bud position above the flower centre to below it.

The pair of lateral petals are small. They are joined to the dorsal sepal on its flanks, forming the hood over the plant’s sexual parts in the central column above the lip. The dorsal sepal is hairy within. It has two notable pouches at the back, as well as a long thin tail curving up above the rest of the flower.

The pair of lateral sepals are pouched in their broader inner parts, spreading widely and curving up as they become thin like Dali’s moustache. The sepals are often green, the petals usually magenta; colour variations are common. The lip is fused to the column of the flower and clawed. Its blade is 8 mm by 2 mm. Flowering happens in winter and early spring.

Bearing no nectar as pollinator reward, this plant capitalises on mimicry. Fortunately for it there is a Polygala flower, Polygala bracteolata, growing in a well overlapping distribution that confuses insects to visit and pollinate both flower species; rewarded only by the Polygala. Something like using a credit card at an ATM, receiving an insufficient funds message and then trying another machine (Liltved and Johnson, 2012; Manning, 2007; Bean and Johns, 2005; iNaturalist).